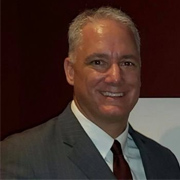 As Chief Executive Officer, Robert F. Licopoli is responsible for representing the best interests of 360 Sports’ stakeholders, i.e. its athlete members and other service consumers, athlete advisors, products, regulators, and investors. He creates and implements strategies to grow the business and brand by developing business relationships and alliances, pursuing corporate opportunities, as well as assisting with oversight and management of the day-to-day operations.

In addition to a proven track record in sports management, Mr. Licopoli has over 25 years of risk management, insurance, litigation, and compliance experience and is proven in the industry.

Mr. Licopoli’s sports management success began with launching and leading the North American Football League (NAFL), as well as his years of commitment to sports as a player, coach, and entrepreneur was recognized in 2005 when he was named as Man of the Year by the National Football Events organization. Robert Licopoli was inducted into the Minor League Football News Hall of Fame in 2016.

As described in the Description of Business section, in 1999, Mr. Licopoli started the NAFL with 360 Sports, Inc. COO, Dr. Chris Harrington, and successfully developed it with the assistance of Mr. Sullivan from 1999 until 2010 when it was sold.

Click here to book a meeting with Mr. Licopoli for a one on one conversation about equity investment opportunities for 360 Sports, Inc.